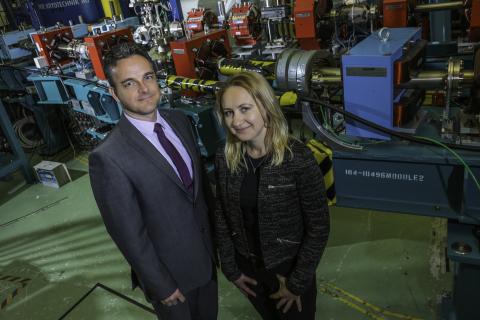 Prof Welsch is head of Physics at Liverpool University as well as leader of the QUASAR Group at the Cockcroft Institute​; he explains how frustration led him to set-up the company:

“So far we have developed beam diagnostic devices as prototypes, developed them, built them, tested them, shown that they are working, but then we have had to let the technology go because a university group cannot be in charge of producing a specific instrument.

“D-Beam will be able to translate cutting edge research into commercially available tools that will improve our understanding and control of particle beams."

Particle beams are used in cancer treatment – such as the new proton therapy service due to open Liverpool's Knowledge Quarter in 2019 as announced recently – as well as facilities such as the Large Hadron Collider and European Spallation Source. This is an emerging area and D-Beam will offer a step-change in precision for the hundreds of large accelerators and synchrotron light sources that are currently in operation worldwide.

D-Beam has world leading expertise in particle beams diagnostics, developed through intense and long lasting research collaborations with CERN. D-Beam will also have access to specific parts of CERN intellectual property through the STFC CERN BIC.

Delyth Lloyd, STFC CERN BIC Manager says “we are delighted to welcome D-Beam to the STFC CERN BIC. It is especially exciting that D-Beam are a spin-out from the Cockcroft Institute and we look forward to supporting their business growth. I'm sure there will be many collaborative opportunities available for them during their time in the BIC and beyond."

Find out more about D-Beam.​​

This article was originally published by STFC here.

Find out more at kt.cern/bic-network

CERN has established a network of nine Business Incubation Centres (BICs) throughout its Member States, to assist entrepreneurs and small technology businesses in taking CERN technologies and expertise to the market.

How can companies enter a CERN BIC?

Companies can directly contact a local CERN BIC to express their interest for adopting a CERN technology. CERN’s Knowledge Transfer group assists in identifying the most suitable CERN technology and the BIC assesses the feasibility of the company’s business plan. If all parties are satisfied that the conditions for joining the BIC are met, a knowledge transfer agreement is signed between CERN and the company, who can then start its incubation programme with the BIC. The incubation lasts from six months to two years depending on the circumstances, includes funding, and the company aims to become fully autonomous upon graduation from the programme.