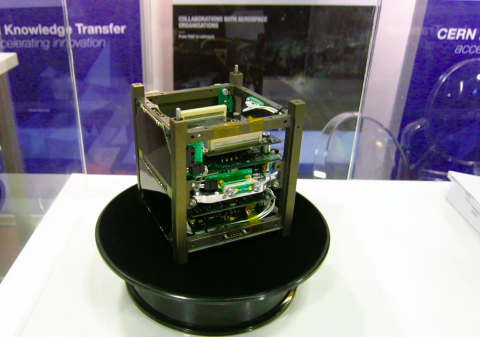 Aerospace engineering and particle physics might not at first seem like obvious partners. However, both fields have to deal with radiation and other extreme environments, posing stringent technological requirements that are often similar.

CERN operates testing facilities and develops qualification technologies for high-energy physics, which are also useful for the ground-testing and qualification of flight equipment. This opportunity is particularly attractive when it comes to testing miniaturised satellites called CubeSats, whose components are typically made using commercial off-the-shelf components, since using standard procedures to ensure radiance tolerance is expensive and time-consuming.

The CERN Latch-up Experiment Student Satellite (CELESTA) intends to develop a miniaturised and space-qualified version of RadMon, a radiation monitor developed at CERN, and to prove that CERN’s High-Energy Accelerator Mixed-Field Facility (CHARM) can be used to test whether products are suitable for low Earth orbit. CELESTA is being developed in collaboration with the University of Montpellier (through the University Space Center) with the support of the ESA Education office. This year it was selected by ESA’s Fly Your Satellite! programme to be sent into orbit in 2018 or 2019.

Many other technologies and facilities link space and accelerator radiation. The TimePix detectors, which are USB-powered particle trackers, are already used by NASA aboard the International Space Station to monitor radiation doses accurately. Monte Carlo codes such as FLUKA and Geant4, which were developed and have been maintained by worldwide collaborations with strong support from CERN since their conception, have been used routinely to study the radiation environment of past, recent and future space missions.

Magnesium diboride (MgB2), the high-temperature superconductor that will be used for the innovative electrical-transmission lines of the High-Luminosity LHC, has also demonstrated its potential for future space missions. VESPER, the Very Energetic Electron Facility for Space Planetary Exploration Missions in Harsh Radiative Environments (part of the CERN Linear Electron Accelerator for Research (CLEAR) facility), is a high-energy electron beam line used for radiation testing and suitable for characterising electronic components for operation in Jupiter’s environment.

These synergies were in the limelight during RADECS 2017, the latest annual conference on Radiation Effects on Components and Systems, held for the first time at CERN in October this year. The aim of the RADECS conference is to provide an annual European forum on the effects of radiation on electronic and photonic materials, devices, circuits, sensors and systems. This year’s theme was “From space to ground and below”, referring to the need for radiation-tolerant systems both in space, aeronautical and terrestrial applications and in underground particle physics experiments.

Find out more at kt.cern/aerospace.

This text is based on an article that first appeared in the October 2017 issue of the CERN Courier.