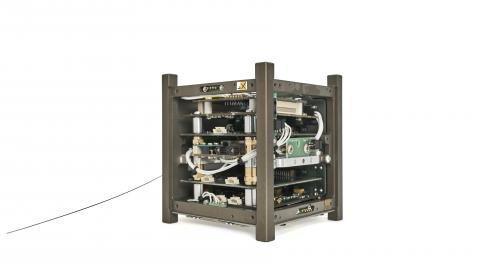 CHARM, a unique facility at CERN to test electronics in complex radiation environments, has now tested its first full space system: CELESTA (CERN Latchup and radmon Experiment STudent sAtellite). The micro-satellite was successfully tested and qualified in July under a range of radiation conditions that it can expect to encounter in space.

The CELESTA cubesat, measuring just 10 cm3, is a technological demonstrator and educational project. It will play a key role in validating potential space applications of an existing CERN technology called RadMon, which was developed to monitor radiation levels in the Large Hadron Collider (LHC). By using RadMon sensors to measure radiation levels in low-Earth orbit, CELESTA will test if RadMon could be used in space missions that are sensitive to radiation, ranging from telecom satellites to navigation and Earth-observation systems.

An additional goal of CELESTA is to demonstrate that the CHARM facility is capable of reproducing the low-Earth orbit radiation environment. This would provide a confirmation that CHARM can be used beyond its original use for high-energy physics, in this case for space applications. “CHARM benefits from CERN’s unique accelerator facilities and was originally created to answer a specific need for radiation testing of CERN’s electronic equipment,” explains Markus Brugger, deputy head of the engineering department and initiator of both the CHARM and CELESTA projects in the frame of the R2E (Radiation to Electronics) initiative.

The radiation field at CHARM is generated through the interaction of a 24 GeV/c proton beam extracted from the Proton Synchrotron with a cylindrical copper or aluminium target. Different shielding configurations and testing positions allow for controlled tests to account for desired particle types, energies and fluences. It is the use of mixed fields that makes CHARM unique compared to other test facilities, which typically use mono-energetic particle beams or sources. For the latter, only one or a few discrete energies can be tested, which is usually not representative of the authentic and complex radiation environments encountered in aerospace missions. Most testing facilities also use focused beams, limiting tests to individual components, whereas CHARM has a homogenous field extending over an area of least one square metre, which allows complete and complex satellites and other systems to be tested.

CELESTA has been developed by CERN in collaboration with the University of Montpellier and the European Space Agency (ESA). It was made possible with funding from the CERN Knowledge Transfer fund. “This is a very important milestone for the CELESTA project, as well as an historical validation of the CHARM test facility for satellites,” says Enrico Chesta, CERN’s aerospace applications coordinator.  Now fully calibrated, CELESTA will be launched as soon as a launch window is provided. When in orbit, its in-flight data will be used to validate the CHARM test results for authentic space conditions.

This article was originally published on cern.ch.