FuSuMaTech opens future of superconducting magnets to academia and industry 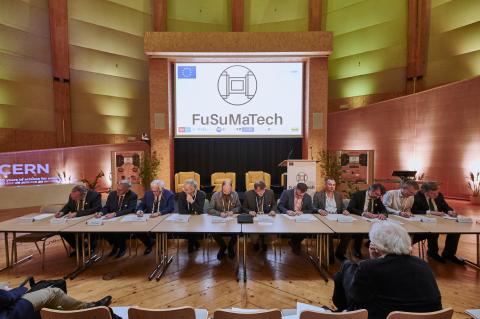 Superconductivity is not something that immediately comes to mind in regards to daily life, and yet it has become increasingly important. Industry, and especially medical instrumentation industries, display a renewed interest in the domain of superconductivity for applications that range from energy storage, to magnetic resonance for neuro-imaging. These applications highlight the societal impact of the investment currently being made in superconducting magnets for post LHC-research, and were the focus of the FuSuMaTech Phase-1 Final Workshop, held at CERN on 1 April 2019.

The Globe of Science and Innovation welcomed the event on the Future Superconducting Magnet Technology (FuSuMaTech) Initiative, and the main outcomes of Phase-1. FuSuMaTech aims to strengthen the field of superconductivity for projects like the High-Luminosity LHC (HL-LHC) and the Future Circular Collider (FCC), while confirming the benefits of this investment through technology pilots for industrial and medical applications. To mark the end of this stage of the Future Emerging Technologies project (Grant agreement Nr 766974), funded by the European Commission, industry (ASG, Oxford Instruments, TESLA, SIGMAPHI, ELLYT Energy, BILFINGER) and academy (CERN, CEA, STFC, KIT, PSI, CNRS) partners gathered to tackle the future perspectives of superconducting magnet technology.

Despite the many possibilities surrounding the future of accelerator machines, the need for higher performing magnets seems to be as certain as the collaboration between academia and industry. “You can’t shape the future of this technology alone,” reinforces Han Dols, leader of Business Development Section at the CERN Knowledge Transfer Group and the event’s moderator. “The workshop helped to reiterate the common areas of interest between academia and industry, and how they might benefit from each other’s know-how.”

This premise was the focus of Professor Frederick Bordry’s welcome address. CERN’s Director for Accelerators and Technology recognised the importance of pushing forward the state-of-the-art in superconducting magnets for both the 2013 European Strategy for Particle Physics and CERN’s Knowledge Transfer (KT) goals. Such collaborative methodology has been at the centre of the FuSuMaTech Initiative since its genesis in 2015, under the leadership of CERN and CEA – the French Alternative Energies and Atomic Energy Commission.

The project expects to facilitate the development of superconductivity and, just as importantly, to demonstrate the benefits of this investment, by setting up generic research-development-innovation actions and technology pilots – or demonstrator projects. For Antoine Dael, project coordinator “the successful preparation of 10 project proposals for both R&D actions and industrial applications is one of the main achievements of FuSuMaTech Phase-1.”

A glimpse of what one might expect from these projects was one of the highlights of the event.

They focus partly on new designs for existing applications, such as a new MRI gradient coils, the construction of new 14 Tesla or 16 Tesla MRI magnets, or the conceptual design of a new “social magnet” and a mammography magnet. New developments are also included in the proposals, with the design and protection of a hybrid LTS + HTS (low temperature and high temperature superconductor) magnet; an e-infrastructure to collect material properties’ by reviewing existing data; and the development and implementation of a Pulsed Heat Pipes cooling system in a cryomagnetic system.

These proposals should now evolve into independent projects and consortia to make use of other EU programmes and their financial instruments. This will be the Phase-2 of the FuSuMaTech Initiative. Each consortium is expected to emerge from the growing FuSuMaTech network, something the twelve founding FuSuMaTech partners have worked together to create, while also building a roadmap for future projects. “We were really impressed with the interest we got from organizations outside of the project,” explained Antoine Dael. “We currently have six industrial partners, two more have already contacted us today, and we expect others to contact us after the workshop.”

The growing FuSuMaTech network is also one of the main achievements of Phase-1, culminating with the signature of the Declaration of Intention between the FuSuMaTech partners on 1 April 2019. The document will take the FuSuMaTech Initiative a step closer to its goal of supporting the development and consolidation of a European cluster to facilitate new developments in superconductivity research and application, and strengthen Europe’s leading position in the domain.