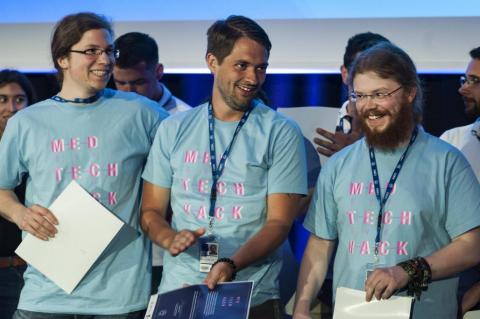 The development of new radiopharmaceuticals used for imaging, for example radiotracers to diagnose dysfunction in body tissues as well as for treatment, is a highly dynamic field that is based on strong collaborations between academia, industry, and university hospitals. Within the last years there has been unprecedented clinical success of new radiopharmaceuticals, for example in treating prostate cancer or neuroendocrine tumours.

Currently, new radiopharmaceuticals can be tested in vitro using traditional scintillation techniques or gamma-counters. However, both testing methods suffer from pipetting errors, are slow, and thereby restrict the number of measurements. One of the key factors to advance research in the field will be the ability to screen the cellular accumulation of radiopharmaceuticals at different points in time in large cell and tissue libraries.

Cell libraries are collections of established cell lines that have an established value in allowing to answer general research questions such as "does a new drug have an effect in lung cancer cells?". Tissue libraries are collections of tissues of patients in a given hospital that allow to answer specific questions such as "We have 20 patients newly-diagnosed with lung cancer - which of them will benefit from the new drug?". Here, there is no real screening method available yet.

To solve this challenge and a series of others, CERN organised a hackathon for students and young professionals in April 2018 targeted at the medical field – the Medtech:Hack. The Hôpitaux Universitaires de Genève (HUG) set the challenge of better screening radiopharmaceuticals and the team named the Radioactive_Boys was selected prior to the hack for their potential to develop innovative solutions. For this, during the hack, they benefited from a coaching by HUG and were given access to relevant CERN technologies.

Why is a hackathon organised by CERN focusing on medical technology? It’s not as far removed from particle physics as one may think. Early activities at CERN relating to medical applications date back to the 1970s. In light of the significant growth in these activities, in 2017, CERN published a formal medical applications strategy. The Medtech:Hack was then initiated to explore new ways of developing viable applications in the field.

The Radioactive_Boys team, when submitting their candidature to the Medtech:Hack, were not only tickled by the challenge but also saw the potential of solving it within the portfolio of CERN technologies.

Benedikt Schmitz did his Masters in particle physics at the University of Siegen, Christian Jung is in his final months of his PhD covering machine learning and neural networks at RWTH-Aachen and Yannik Schädler is writing his Master Thesis on physics of complex systems at the University of Bremen. With their physics background, they know that imaging and diagnostics are an essential part of the work in high-energy physics. They also know CERN had projects to produce new isotopes for medical applications. But they were not aware of the details of specific programmes.

They selected a Gas Electron Multiplier (GEM) detector using CERN-developed technologies, GEMPix, that measures and visualises the low-energy deposits in gas or tissue-equivalent sample. This allowed them to reach high spatial and temporal resolution within the modular hybrid scanner they developed to measure radioactivity in large cell and tissue libraries.

Why GEMPix? Because for them it was the ‘best detector in town’, even better than what they initially thought. It allows for a precise determination of all kinds of radiation that is emitted by the radiopharmaceutical and from this the fast determination of the effects on cells. They combined GEMPix with ROOT, TMVA and GEANT4 software to simulate the geometry and measure how well the radiopharmaceuticals are absorbed by the cells.

With all that acquired knowledge the team proposed a solution called “BioScan” which can help find custom-made therapies for all patients. As the efficiency of chemotherapy differs for different people and cancer types, using the ”best detector in town” helps to find clues for the ideal treatment before the treatment really starts and before negative aspects trigger. This system allows now for a determination of the efficiency of different pharmaceuticals and a personalised, optimised treatment for each individual patient.

When asked about their experience during the Hackathon, Yannik Schädler, one of the team members, stated: “We learnt that CERN is eager to prove themselves as motor of innovation and progress for society at large. The HEP community is not only providing progress to basic research and to fundamental questions, but also to fields in the life sciences and therefore to applied research. Their technology has high potential and generates a lot of innovative applications.”

A key role was played by the Challenge Owner Professor Martin Alexander Walter, Head of the Nuclear Medicine and Molecular Imaging Division at HUG. He provided a lot of insight and boundary conditions that the team had to keep in mind. The discussion allowed the team to scale down the needed detector and therefore save money and energy needed for the evaluation.

For Professor Walter, the potential of their solution is incredibly high. “High-throughput for genes and for proteins already exist in the form of genomics and proteomics,” he said. “The proposed machine could add to these analytical tools by high-throughput measurements of cell function. Establishing such an analytic tool requires the combination of biology, chemistry, radiochemistry, physics and engineering for a biomedical purpose. The overall success and its timeline will crucially depend on the ability of successfully combining and integrating these fields.”

Provided the team finds enough funding and expertise (including the one from CERN) to build a prototype research can continue to optimise the scanner in partnership with HUG.

A step in this direction was already achieved at the end of the Medtech:Hack as the team won a stay at CERN to continue developing their project and they were selected to the second round of judging at MassChallenge Switzerland which mission is to support a selected team on their way to becoming a start-up.

As Thierry Duvanel, Managing Director of MassChallenge Switzerland, explained: “We selected this team because they had a sound understanding of the technology presented, their approach seemed to be unique on the market and they were the ones expressing the best the impact they wanted to generate in the future.”

The pitching round only happened one month after the MedTech:Hack and represented a great challenge for the team to bring their idea from the Proof of Concept to a viable product offering in such a short timeframe.

Let’s keep a screening eye on the next development stage of the BioScan solution! Even more so as there might be future opportunities to explore with the work undertaken in AIDA 2020 Work Package 13 on GEMs development. In particular, techniques producing new structures and handling large areas are being developed and could be of direct benefit to the BioScan solution when building larger scale prototype. This could generate a multiplication of possibilities ahead.

Article originally published in On Track