Make Your Next Scientific Conference Stand Out 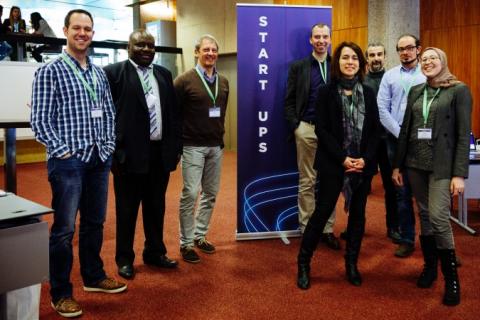 Do start-ups have a dedicated space at your next scientific conference? In February, the impact of the International Conference on Translational Research in Radio-Oncology – Physics for Health in Europe (ICTR-PHE) was boosted by hosting a start-up corner for the first time. “The CERN Knowledge Transfer Group is committed to strengthening the links between research and entrepreneurship,” says David Mazur, who leads the Intellectual Property Dissemination at CERN.

The ICTR-PHE, first organised in 2012, has always included an industrial exhibition as part of its programme. This year a new dedicated start-up corner promoted six recent start-ups and spin-off companies related to CERN’s technologies. Participants could learn about the latest innovative solutions offered by these young companies which touched on subjects as varied as Monte Carlo simulations for radiobiology, real-time exchange and collaboration in clinical trials, and e-training in radiotherapy.

“Why doesn’t every conference do this?” wonders Frank Verhaegen, who wears two hats – one as head of research in medical physics at the Maastro clinic in the Netherlands and another as co-founder of SmART Scientific Solutions, one of the start-ups present at ICTR-PHE 2016.  The start-ups say they benefited from the catalysing role of the scientific conference to help grow their companies into key industrial players of tomorrow.

“Conferences are about networking, and the start-up corner made that stronger,” concludes David Mazur, who adds that the extra organisation was straightfoward. He already has a list of enthusiastic start-ups willing to be part of the next ICTR-PHE, who in exchange for a modest fee get a five-minute pitch in the conference programme and a stand at the start-up corner.

In the mean-time the Knowledge Transfer group wants to help the CERN community capitalise on the presence of entrepreneurs at scientific conferences. Members of the CERN community who are interested in the idea of a start-up corner at their next conference can contact the Knowledge Transfer group (link sends e-mail) for advice and success stories.