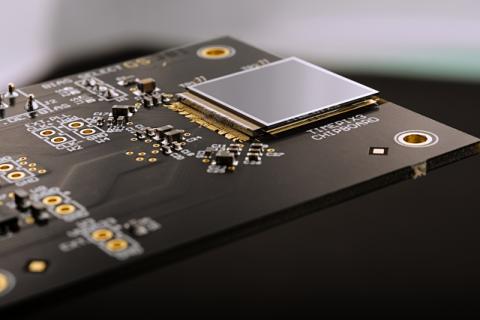 How could microchips developed for detectors at the Large Hadron Collider (LHC) be used beyond high-energy physics? This was a question that led to the Medipix and Timepix families of pixel-sensor chips. Researchers saw many possible applications for this technology, and for the last 20 years these chips have been used in medical imaging, in spotting forgeries in the art world, in detecting radioactive material and more. A recent CERN symposium commemorated the two decades since the Medipix2 collaboration was established, in 1999.

Pixel-sensor chips are used in detectors at the LHC to trace the paths of electrically charged particles. When a particle hits the sensor, it deposits a charge that is processed by the electronics. This is similar to light hitting pixels in a digital camera, but instead they register particles up to 40 million times a second.

In the late 1990s, engineers and physicists at CERN were developing integrated circuits for pixel technologies. They realised that adding a counter to each pixel and counting the number of particles hitting the sensors could allow the chips to be used for medical imaging. The Medipix2 chip was born. Later, the Timepix chip added the ability to record either the arrival time of the particles or the energy deposited within a pixel.

As the chips evolved from Medipix2 to Medipix3, their growing use in medical imaging led to the first colour X-ray of parts of the human body in 2018, with the first clinical trials now beginning in New Zealand. In addition, the versatile chips have gone beyond medicine, for example, a start-up called InsightART allows researchers to use Medipix3 chips to peer through the layers of works of art and study the composition of materials to determine the authenticity of pieces attributed to renowned artists.

The team behind InsightART, based in Prague, recently scanned an alleged Van Gogh, concluding that the work was most likely to have been produced by the Dutch master, having observed an underlying sketch very similar to other figures Van Gogh painted at the time. The work will be sent to the Van Gogh Museum to be vetted with this evidence, and it might be that not one but two Van Goghs have been found in the same piece.

Timepix-based detectors have been aboard the International Space Station since 2012 to measure the radiation dose to which astronauts and equipment are exposed, and in 2015, high-school students from the UK sent their own Timepix-based detector to the ISS with astronaut Tim Peake. The ability of the chips to detect gamma rays has been exploited to help with the decommissioning of nuclear reactors and is being evaluated for the detection of thyroid cancer with greater resolution than before and with a lower radiation dose to the patient.

The Medipix and Timepix chips, developed by three collaborations involving around 32 institutes in total, have been remarkable examples of knowledge transfer from CERN to wider society. You can learn more about the history of Medipix and their many applications in this talk by Medipix spokesperson Michael Campbell, given in June 2019.