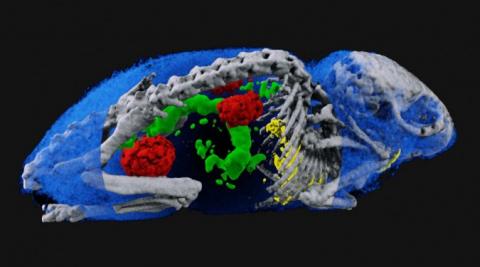 Ever since Röntgen discovered x-rays in 1895, physics and medicine have gone hand in hand, and advances made to particle detectors at CERN and elsewhere have continuously fuelled new developments in medical imaging.

The Medipix Collaborations, whose activities started in the 1990s developing a detector technology for the needs of the Large Hadron Collider (LHC) experiments at CERN, have commercialised Medipix in other scientific fields, in particular the medical imaging field.

Medipix works like a camera, counting and detecting each individual particle hitting the pixels when its electronic shutter is open. This enables high-resolution, high-contrast, noise-free images – all reasons that drove most of the LHC experiments to adopt the technology.

Through the Medipix Collaborations, a family of read-out chips for particle detection was developed, and to date there have been three generations of the Medipix chips – each with improvements and new features.

Among a wide range of other applications, Medipix can be used for Computed Tomography (CT) scans. During a CT scan, an X-ray tube is rotated around the patient, resulting in images showing both shape and density. In addition, unlike conventional X-ray images, overlapping structures are eliminated. There are many applications for this technique, but it is especially useful when searching for lesions, tumours and metastasis.

The third generation of read-out chips, named Medipix3, also allows ‘colour’ imaging during CT scans, or so-called spectral imaging. By sending X-rays of different energies through the object being examined, the Medipix3 chip can detect the photons one-by-one, categorising them according to their energy, thus providing information about the density and the atomic structure of a tissue. For example, while regular non-colour X-ray images from CT scans may show the difference between bones and soft tissue, spectral imaging is better able to distinguish between different materials of similar density. This aids medical staff with diagnosis, as materials that would previously appear the same in an image can now be classified.

At present, spectral imaging has several applications on the market, but it is still in the emerging phase and has not been widely adopted. The start-up company MARS Spectral Imaging is working on spectral molecular imaging technology based on Medipix3. When combined with biological tracers attached to metal nano-particles, their scanners can allow researchers and clinicians to measure biochemical and physiological processes, modelling human diseases in animals. Although still in a pre-clinical phase, meaning that the scanners cannot yet be routinely used on humans, the MARS team has concluded that the technology will be useful in the diagnosis and treatment of heart disease, stroke, arthritis, joint replacements and cancer.

In addition to pictures with new and improved diagnostic information, MARS promises that spectral imaging will enable faster and cheaper radiology procedures while working with significantly lower radiation doses. This will considerably broaden both the value and use of Computed Tomography (CT) as a diagnostic tool, and consequently the potential of spectral imaging technologies has received a lot of attention lately from medical professionals. It is still too early to say if Medipix and MARS will be dominant players in the field of spectral imaging, but they undoubtedly offer a promising solution in this emerging field.

Find out more at the next Knowledge Transfer seminar: “From High Energy Physics to a Bio-Medical Business”, by Anthony Butler, Chief Medical Officer (CMO) in MARS Spectral Imaging here.

Friday 19 May 2017, 11.00 a.m.
Council Chamber
You are invited to join the speaker and organisers for coffee at 10:30, in which there will also be a 'KT Clinic' where you can ask questions about the activities and services of the Knowledge Transfer group.
The seminar will be webcast live.

This article was originally published at the main CERN website