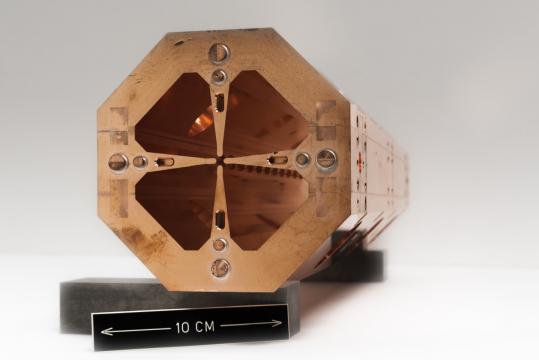 The goal of NIMMS is the development of technologies for the next generation of compact, performant and lower cost accelerators for ion therapy of cancer. The project outlines an R&D programme for the development of related critical accelerator technologies ; the programme builds on existing activities and on core CERN competences. Two accelerator designs have been identified by a large hadron therapy community as the most promising options for future ion therapy facilities: a superconducting synchrotron and a high-frequency linac. Instead of fully developing the two alternative designs, the present project aims at concentrating CERN funding only on the development of few key technologies that correspond to its key competences, and leaving to the end users the role of assembling the technologies into a user-specific design. Furthermore, as soon as one of the two design options will appear superior to the other, all CERN resources will be dedicated to it.  The project is organised in 3 work packages (superconducting magnets, linacs, gantries).

Additional funding was given in 2021 to cover the 2nd phase (2022-23), building on the success of the 1st phase, 2019-21. This Phase 2 aims at fostering the CERN engagement in the recently approved EU projects, and at making additional collaborations possible moving to the following phase of prototyping, demonstration, and detailed design of the NIMMS technologies. NIMMS2 resources will be engaged in the design of a curved high-field cos-theta superconducting magnet demonstrator for gantries, in the design optimization and testing of ECRIS ion sources for medical accelerators, in the detailed definition of an advanced SC synchrotron for ion therapy, and in a new activity exploring the potential of Machine Learning in the field of medical accelerators.

The NIMMS programme comes twenty years after the Proton Ion Medical Machine Study (PIMMS) [1], initiated at CERN in the 90’s in partnership with TERA Foundation (Italy), MedAustron (Austria), and Onkologie 2000 (Czech Republic). PIMMS aimed at producing a synchrotron design optimised for treating cancer patients with protons and carbon ions. The proposed design was detailed in two reports issued in 2000; The initial design was improved by the TERA Foundation, and finally evolved into the machine built for the CNAO treatment centre in Italy, with seminal contributions from INFN. Later on, MedAustron in Austria built its treatment centre starting from the CNAO design and received technological support from CERN.