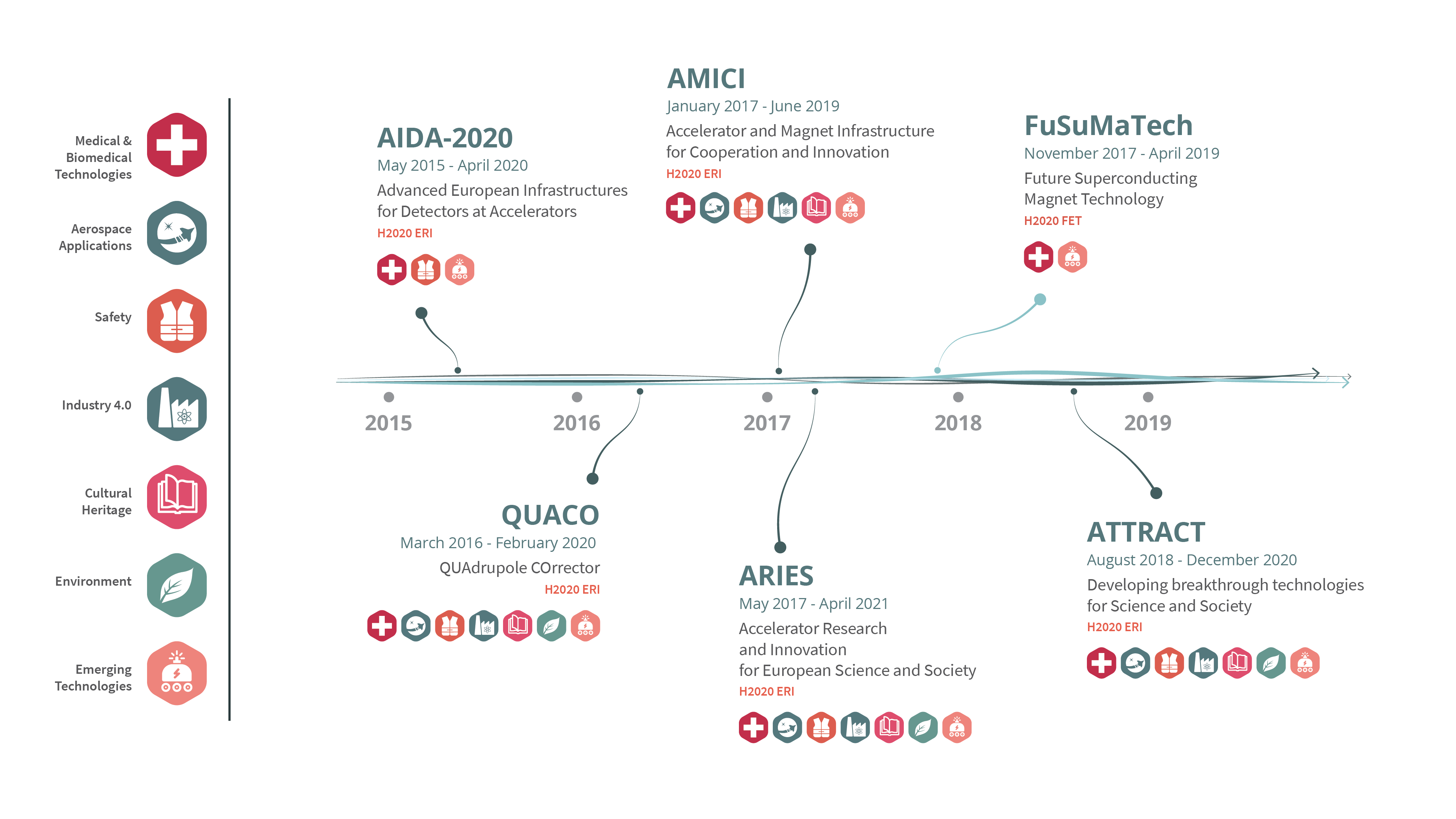 One highlight from CERN KT involvement with EC co-funded projects is ATTRACT, which aims to fund 170 breakthrough concepts on detection and imaging technologies.

The Joint Research Centre (JRC) is the scientific and technical arm of the European Commission. Its mission is to provide independent scientific advice and support to EU policy. The JRC initated the Technology Transfer Office (TTO) Circle, a network brining together leading public research organisations, including CERN. In May 2016, CERN took part in the European TTO Circle's ninth plenary meeting in San Sebastian. Throughout 2016, CERN and the JRC continued to collaborate in fields relating to big data, medical radioisotope production, and neutron data for nuclea energy applications.

Launched in 2016, CERN and the JRC have developed the Technology and Innovation Monitor (TIM) platform. TIM is a series of technology watch systems to map areas of science and innovation. Among other applications, the tool can be used by energy technology experts to analyse innovation trends in energy technologies. TIM is based on the original idea and concept behind Collaboration Spotting, a novel visual analytics tool developed by CERN to map academic and industry collaborations around key technologies for particle physics.

In 2016, HL-LHC was formally approved by the CERN Council. 2016 was the year of the consolidation of the civil engineering and technical infrastructure design with civil engineering plans presetned. Several technical milesontes were achived, such as the production of full cross-section models of the HL-LHC's future quadrupoel magnets or the components for the crab cavity cryo-assemblies. Both casses are examples of fruitful international collaboration that CERN has established with more than 40 laboratories and universities. In addition to the technical tests, the industrialisation plan for the HL-LHC production was validated by external reviewers.

EuCARD-2 stand for Enhanced European Coordination for Accelerator Research & Development. This European project, in which CERN takes part, started in 2013 and connects different large accelerator laboratories. Together with STFC INnovations Ltd, the CERN Knowledge Transfer group leads the work package on "Catalysing Innovation". An industry workshop was held in Warsaw in December 2016 on "Low-energy electron beams for industrial and environmental applications". It brought together 70 participants from industry, academia, and research institutes.

AMICI aims to build greater cooperation between European Accelerator Research Infrastructures and to strengthen European companies’ competitiveness as innovators and suppliers to the accelerator community, and to other sectors such as healthcare and space. In 2018, CERN group leaders identified competences and facilities that could be made accessible to industry. A report will be published in 2019.

QUACO brings together several research infrastructures for magnet development. In 2018, it concluded Phase-2, the engineering design. Prototypes have been produced to demonstrate the validity of the designs. Two EC reviewers and an external scientific body considered it as an innovation example for accelerators. The project entered Phase-3 in November for the manufacturing of two pilotquadrupole magnets.

The FuSuMaTech Initiative aims to establish a European network for strengthening the field of superconductivity, superconductive magnets and associated industrial applications. It is taking the form of concrete actions, such as the creation of a database of the materials’ properties or the preparation of technology-pilot projects. In April 2018, the FuSuMaTech initiative organised an intellectual property workshop at IdeaSquare. In April 2019, the twelve FuSuMaTech partners will organise a Phase-1 final workshop, focused on the initiative’s progress and perspectives for Phase-2.

AIDA-2020 brings together leading European research infrastructures in detector technology, as well as institutes, universities and technological centres. The project supports the development of detector systems for high-energy physics, while promoting the transfer of these developments to industry, where they may lead to societal applications.

ARIES was designed to improve the performance, availability, and sustainability of particle accelerators, transferring the benefits and applications of accelerator technology to both science and society, enlarging and integrating the European accelerator community.

In 2018, ARIES launched the Proof-of-Concept innovation fund for industry-oriented activities, awarding funding to four promising projects. One of these projects, coordinated by the RIGA Technical University, proposes to reduce the content of sulphur and nitrogen oxides and of particulate matter in the exhausts of maritime diesel engines using an electron beam accelerator. In 2019, the first measurements confirmed the expected reduction in pollutants. A dedicated project, with the goal of installing and testing a specially designed accelerator on a real cargo ship, requested funding to start in 2020. On the R&D aspect, ARIES also succeeded in producing a high-temperature superconducting (HTS) tape that reached a record current density on a series of samples, thus opening the possibility of scaling-up for industrial production for the future collider machines.

The ATTRACT project started in August 2018, with an open call to fund 170 breakthrough concepts on detection and imaging technologies. It represents a significant opportunity for CERN and its associated research and innovation communities for testing and consolidating technology concepts that will be implemented in future technology upgrades of CERN’s scientific infrastructure. The call received a total of 1211 proposals addressing the topics of sensors, front- and back-end electronics, data acquisition systems and computing, software and integration.

A subsequent phase of the project is envisioned within H2020 that would allow scaling up a selection of the funded projects towards a more mature technology readiness level. The ATTRACT project constitutes an opportunity to establish new knowledge transfer links for CERN towards industry, channelled by the Knowledge Transfer group.